Plot: None yet? Try the prepackaged route

All right. Now it’s time to get down to the real nitty-gritty of writing your novel for NaNoWriMo. And first, we’re going to talk about the plot of your story. I hope, since it’s November 2, that you’ve already got an idea for a plot. And of course, if you’re writing something nonfictional, you don’t have a “plot,” exactly, but a topic of study or discussion. However, even though in this post (and the next) we’re going to talk mainly about ways of handling stories, some of the approaches may also apply to nonfiction.

While it’s a bit late to be trying to think of ideas, you may still be feeling like you’re floundering in that regard. These are a few thoughts off the top of my head that might help you get started.

CAN I JUST MEANDER AND SEE WHERE THINGS GO?

This approach is not quite a “prepackaged approach” (more definition of that phrase later), except that you do start with some characters whose personality and even perhaps backstory is based on ideas or preferences that are already set in your mind. So you start with an advantage in that respect.

All right, then. Say that you do just decide to casually start something, anything, and see where it goes. That can work, as long as you remember a few things. You need to be interested in what you’re writing about. It might sound odd to say that, but in one of my failing NaNo years, I dropped my story halfway through because I realized that I just didn’t care too much about the characters; nor did I particularly care what happened to them. Again, this approach should be based on preferences and interests that you already have.

So for this “meander” thing to work, you need fairly quickly to develop an emotional connection with your characters and feel some emotional stake in where the story goes. If you start on something that you don’t have a real emotional stake in, it can get rather hard to keep pushing yourself to work on it if you go through some rough patches at mid-month. If you find yourself behind by a couple thousand words, for example, or if it’s difficult finding time to write, how determined will you really be to keep at it if you are writing a story you’re not terribly interested in or about characters you don’t care much about?

If you do want to try this route, ask yourself some questions to get your imagination started and to begin engaging with your own interests and preferences. What sorts of things do you daydream about if you have the chance? Do you ever find little stories or narratives running through your head when you have some free time to think? Do you glance at people on the bus or people a few rows down in the audience at a sporting event and speculate about the lives they lead? If you do this sort of thing, you’ve already got plot possibilities ready and waiting to be animated. (I long ago noticed that the idea of two friends who are very close and love each other a lot being thrust into conflict with each other is a theme that fascinates me. And don’t get me started on the good-twin-bad-twin thing. Or hints of the Indo-European type of “divine twin” myth.)

Or rather than pulling up types of stories or narratives from your sub(and sometimes not so sub)conscious, is there a fictional character you’ve invented in your head and for whom you’ve already developed some kind of backstory? If this is a character you already like, whose personal life you are already familiar with and perhaps whose head you are already inside, why not make up a couple of other characters and devise the bare bones of their personalities and history? Then set your existing character and these new characters together in an elevator or a board meeting or on a tour of a big city, and see how they interact with each other.

Do two of these characters know each other, but are trying to hide this fact for some reason? Or are they suspicious of the third person? Does one of the people have a tragedy in his or her history that will soon come to light? What if one of the characters hates one of the others, and the third person either gets dragged into their conflict or tries to act as a conciliator? Where did that conflict come from? What will its repercussions be, right after this tour is over or right after the elevator gets unstuck? Is one of them planning something awful to do right after he or she gets out of this current situation? Can the other two characters tell? What do they do about it?

Sometimes the characters themselves will take over as they interact and you see their different personalities and stories playing off each other. These interactions can even show you exactly where the story should go. If you have a “favorite theme” that your internal narratives tend to follow, it’s likely to surface again here and work with your characters’ increasingly revealed personalities to guide the story along.

You might also take these three characters and decide on a climactic finish for your story—and then you have to figure out how these particular characters will get to that finale. 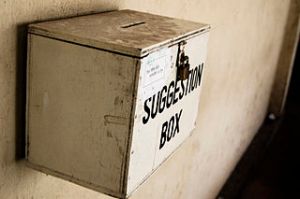 Use prompts and suggestions (Photo by Flickr user Hash Milhan CC By 2.0 https://creativecommons.org/licenses/by/2.0/deed.en)

What I’ve been doing with my questions about your three characters has been giving you suggestions that are commonly referred to as prompts. A prompt is an idea, question, or statement that suggests topics to you or that gives you a brief instruction about something to write. So these are sort of “prepackaged” in the sense that these questions are coming from outside you, giving you a structure within which to write.

These questions and statements are used a lot by writing coaches and others who are trying to help people learn to write or even to help them get past writer’s clock. These prompts are meant to get your brain working and perhaps to spark something that you’ll be interested in writing about. For example, one prompt might be, “Write about a walk through your neighborhood, but from a dog’s point of view.” This is an idea that is different enough that it might shake your brain out of its usual viewpoint and get the “what ifs” really going. Other prompts (e.g., “Write a descriptive paragraph without using the word ‘the’”) might just be designed to give you some practice in honing your writing skills themselves.

The facilitator for a novel-writing workshop I took years ago once said, “You can’t steer a car that’s not moving.” Her idea was that by starting to write, you have begun to move your mind, and only then can the direction be determined and these random ideas start taking shape.

So. Back to your three characters. If you get them created, you can even try to imagine your own prompts to get them moving forward. Ask questions about their lives. Ask why they happen to be in that place at that time. Ask what their goals are, perhaps for that day or perhaps for their lives in general. (You can even ask questions about the weather—what if there’s a tornado coming, and they are stuck in a building where they have to help prepare the building for the tornado? What about their families back at home?) Try going at them with the five Ws and the one H: who, what, where, when, why, and how.

(And by the way, Scribendi.com did a great set of prompts for the thirty days of NaNo, for those who aren’t sure they want to commit to 1,667 words every day but who would still like to write something every day. Check it out: The 30-Day Writing Challenge: An Alternative to NaNoWriMo for Writers Who Fear Commitment.)

Do not scoff at this, if you have not written fanfiction before. Haven’t you watched some TV series or read a book and thought, “Yeah, but they never dealt with this problem” or “Surely those two characters have more of a story to be told” or the one that bothers a great many watchers and readers from almost every brand of fandom, sooner or later—“They shouldn’t have ended the story that way”? There’s a gap that just glares at you somewhere in the history or even the logic; have you devised explanations that fill that gap or ways to explain the seeming contradiction? Or haven’t you thought of a particular story for those characters and wished the writers on the show or the author of the book from that world would actually write it? It would be perfect for these characters and this world.

Now’s your chance. Sit down and do it yourself! The bonus is that you don’t even have to go through the grind of creating new characters or imagining a setting and a history for them. That’s already been done for you. And letting your characters interact for a while to see where they might take the story? You already know how the characters interact with each other; you don’t even have to waste time on any extra writing just to discover that. You just need to get in there and tell the story that’s been in the back of your head for so long. It’s not “cheating,” if that’s what you’re worried about. It’s just a shortcut.

Two of my own “winning” NaNos have been fanfic. And one other winner has been a sequel to the story the year before; you can even use your own pre-existing stories as “prepackaged” worlds and character sets to work with.

IT WORKS WITH NONFICTION TOO

When it comes to writing a nonfiction NaNo, you can use some of the above ideas to help you even when you’re not creating characters or writing an actual story. One of my favorite questions has always been, “If you walk into a bookstore or library or if you do a web search for a particular topic, what is the first section or topic you always seem to gravitate to, before any others?” I know my own “first sections” in a bookstore: academic studies of myth/religion, history, and science. I even know the subdivisions. For myth, they are Celtic, Indian, and Greek. For history, they are ancient Egyptian and Indo-European. For science, we are primarily talking astronomy and astrophysics.

Granted, those are still extremely general topics, but even eliminating other topics can help you narrow things down. And you keep narrowing further until you get to a subject within that broader topic that you are really interested in. Again, the Ws and the H can help with that. Or you can pick just one, and see where you go with it.

It doesn’t hurt to use every available tool there is. If you need some prompts to get writing, or even if you need to write inside a world that someone else has already devised, go for it!